August 7, 2014August 13, 2014 beingamommy
Here’s my first recipe post of Steamed Apples for Infants. When Nabeel (yes, my 2 year old restless son :-)) was 6 months old, I introduced him to his first outside feed (read, meal) – Steamed Apple. All this while he was exclusively breastfed as per the doctor’s advice. On turning 6 months, the doctor gave me a go ahead for solids and recommended I start with apple puree.

All excited and happy, I entered the kitchen armed with a ripe red apple but at the same time clueless as to how to make it easily edible for my baby. Quickly, I connected with a few mommy friends and experienced family members to get my answer. Most of them suggested pressure cooking the apple or steaming it by way of cooking chopped apple in a little water till it softens. One of them even advised just finely grating the apple and feeding it to the baby. Raw apple?? How on earth can a baby be fed its first outside food raw??  Somehow, I was not very convinced with the methods suggested. I was not ready to pressure cook the humble apple nor subject it to “steaming” (which technically was stewing). Agreed, apple is a hard fruit and has to be cooked well so that it can be churned into a nice puree which the baby can easily slip down through the throat. But I wasn’t ready to resort to any of the suggested ways of cooking the apple. I thought for a while and finally decided to steam it, the correct way. My experiment was successful and Nabeel happily finished off his first ever halve of an apple. No fuss, no puking, no tantrums. What else can a mother wish for?

Over the next few days, I continued with this practice. Then one fine day I decided to experiment again (one of the hobbies on my CV is experimental cooking and I don’t hold back even if it is for my 6 month old), this time I tried to flavour it with cinnamon. Instead of adding cinnamon powder to the puree, I steamed the apple with a cinnamon stick. This ensured that only the lovely aroma of cinnamon penetrated the apple, lightly flavouring its flesh. Voila, Nabeel gulped the spiced cinnamon apple puree with gusto. This made me realize that I had a 6 months old foodie at my disposal who definitely had inherited my taste buds. Again, what else can a “foodie mom” wish for?

My Steamed Apple recipe for infants is explained below, step by step with pictures. It’s no big deal following the recipe. Feeding it to the baby definitely is :-). Let me know how your infant enjoyed it.

Look out for my next recipe post on . Sorry, I couldn’t do the porridge, instead posted this Chicken Soup for Babies Recipe. 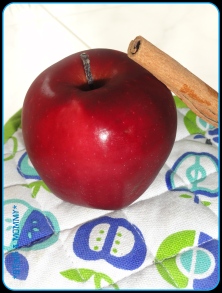 Cut the apple into quarters. Leave the skin on. The picture shows the seeds and pith intact, you may choose to remove them before steaming (actually, do remove them. I forgot to do so, it’s been some time now since I made this). Start with just 2 quarters; it should be enough for the first time.

Place the apple in a steel colander, which in turn has been kept on a vessel which has little but enough water to produce steam. Choose a colander or a jaali with big holes which will help lessen the cooking time. The picture shows a cinnamon stick, I would advise not to use cinnamon if this is the first time you are giving your baby some solid. Let him/her get used to the natural taste and then introduce flavours. Steam the apple covered till you get the lovely cooked apple aroma. Exactly after 5minutes switch off the gas and let it stay covered for another 5 minutes.

This is how your steamed apple will look. The flesh will be brown and soft to touch. To be doubly sure, try inserting a knife right through to check for doneness.

Next, remove seeds and the pith (if you did not do it earlier). Press the apple, flesh side down, over the sieve. Lightly press it with the back of the spoon to collect the puree below. Discard the skin of the apple. Luckily, I had this set of infant food preparation tools which proved to be very useful. You may need to keep a bowl below the sieve to collect the puree. 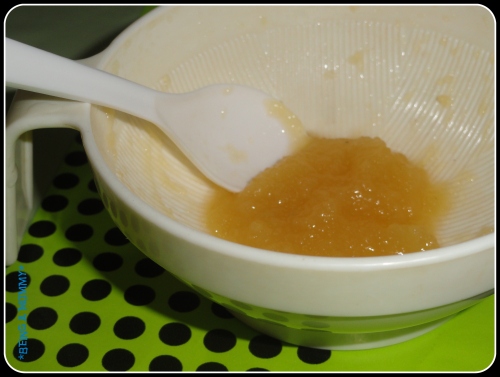 Give the puree immediately to the baby once it attains room temperature. I would not advise you to adjust the taste of the apple by adding sugar or salt. Bland or sour, give the apple as it is to the baby.