I started non vegetarian food for my baby pretty early. At 7 months he was being fed a bowl of hearty chicken soup which helped him remain warm since it was winter then. The doctor did not advise me to do so; I merely followed what the experienced family members suggested. It was not a bad idea and Nabeel also looked forward to his soup. It’s OK to give the soup twice or thrice a week, I would not advise preparing it on a daily basis.

The soup is more like stock and not strictly chicken; it also has a few veggies and a spice or two. I add carrot and onions while boiling the soup which can be discarded on straining. A clove or a peppercorn is also added often for a nice flavour and the extra warmth they provide during winters.

My Chicken Soup for Babies Recipe is as follows:

This recipe makes enough for a one time feed for a 6 to 9 month old baby.

½ a carrot – cut into chunks

Salt and Pepper – for taste

Step 1 – Put all the ingredients in a stock pot or deep vessel. 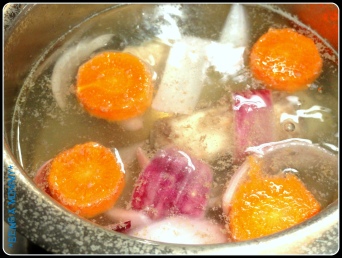 Step – 2 Add enough water to cover them and boil the soup till the chicken is cooked. A good way to know if the soup is ready is to take in the aroma and also check on the froth (impurities) that come on top.

Step – 3 Remove the froth and discard. Never mix it with the soup.

Step – 4 Once the soup is ready, strain it. You may choose to mash the carrots and mix with the soup.

Step – 5 Add a little salt and pepper to the soup.

Step – 6 Serve once the temperature is right for the baby.

Tip: Choose chicken pieces that have less flesh on them. Something like the neck, wings, ribs, etc. Do not use only bones; some flesh is also required as it imparts taste and good texture to the soup.