Cinnamon is my favourite spice to use, when it comes to baking and these Cinnamon rolls have been on my to-do list since long. Having enjoyed them at many breakfast buffets during holidays the urge to bake them at home had just been growing. Finally, when I managed to get cream cheese I knew what it would be used for…to dress my homemade Cinnamon Rolls. More so, one of my favourite bloggers made these recently and I had to follow suit 🙂

Cinnamon Rolls are a favourite breakfast item in the US, equally enjoyed in Europe and other parts of the world, made famous mostly by the popular chain of cinnamon roll outlets, Cinnabon. Cinnabon is now in India and Indian’s sure love their cinnamon rolls. 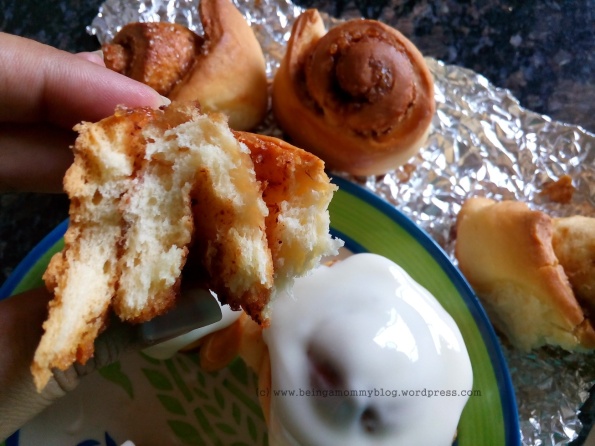 Cinnamon rolls are commonly baked and that is how I cooked them. But, they can also be cooked by deep-frying, similar to doughnuts, so if you are a doughnut and a cinnamon roll fan then you have a chance to enjoy the best of both at the same time.

We enjoyed the cinnamon rolls for breakfast (obviously) and my boy enjoyed licking off the sinful cream cheese icing the most.

If you are in love with Cinnamon Rolls and would like making them at home then follow this easy, from scratch recipe that yields melt in the mouth rolls. The icing can be prepared using only icing sugar and water in case cream cheese is not easily available.

Melted butter, for greasing and brushing

Method
Step 1 – To prepare the dough, activate yeast in luke warm water. Cover and keep aside till the mixture turns frothy.
Step 2 – Sieve the flour in a bowl, add in salt and mix well.
Step 3 – Mix in the remaining dough ingredients, including yeast mixture and knead to form pliable soft dough.
Step 4 – Cover the bowl with a muslin cloth and let the dough double in size. It will take approximately 1 hour for the dough to proof and rise.
Step 5 – Once the dough has risen, remove it on the kitchen platform and punch out the air.
Step 6 – Roll the dough into a rectangle, roughly about 7 x 4 inches.
Step 7 – For the cinnamon layer, mix the brown sugar and cinnamon powder well. Apply melted butter over the dough and spread the cinnamon mixture evenly, over it. 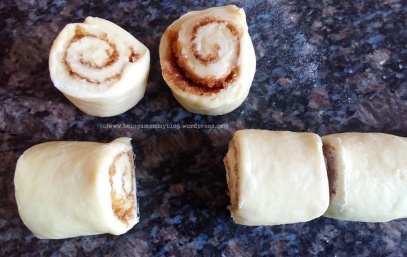 Step 9 – Take an 8 inch round cake tin and grease it with butter. Place the cinnamon rolls in it with cut side up. Cover the rolls with a damp muslin cloth and let them double in size.

Step 10 – While the rolls proof, pre-heat the oven to 200 C.
Step 11 – Once ready, pop the rolls into the oven. Rolls should take about 40 to 50 minutes to bake. If you notice the top of the rolls browning then cover with a piece of foil to prevent further darkening.
Step 12 – Remove the cinnamon rolls from the oven and brush with melted butter, if you like. Keep aside to cool before pouring the cream cheese icing.
Step 13 – To prepare the icing, mix all the ingredients vigorously to a smooth mixture. Pour over warm cinnamon rolls and serve immediately. 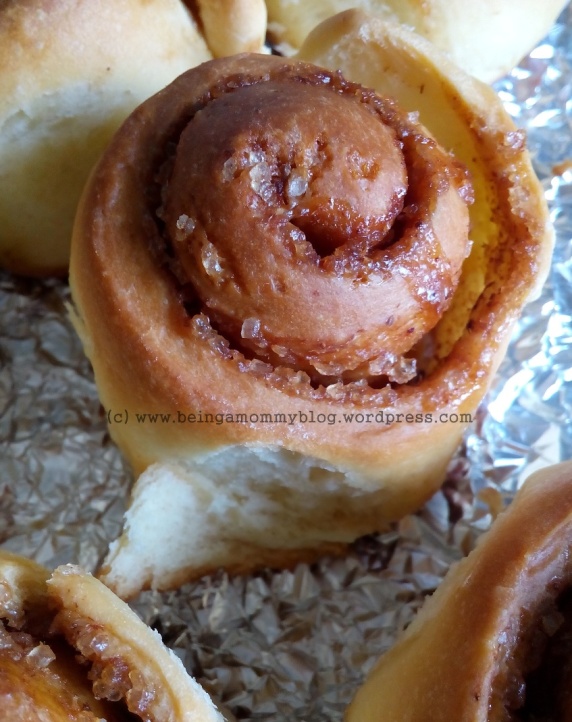 Till then, Love Being a Mommy!